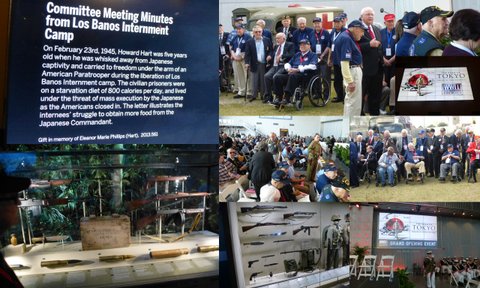 Howard and I had the privilege of attending the Grand Opening of “The Road to Tokyo” exhibit at The National World War II Museum in New Orleans held on 10 and 11 December.  We were honored to be a part of this event and to be able to meet and hear firsthand some fascinating stories of many of the sixty veterans who attended.  Among those we met was  a 106 year old veteran who was with the Engineer Battalion in New Guinea; a P51 pilot; a B25 pilot; one of two surviving men from the Doolittle Raid on Tokyo – he was Doolittle’s co-pilot; and one of two surviving Medal of Honor recipients from Iwo Jima.


This stunning exhibit marks the trail from Pearl Harbor to Tokyo Bay through New Guinea, Southeast Asia, the Himalayas, Burma, the islands of the Pacific, China, India, and Alaska.  I quote from the brochure:  “Exhibit treatments bring to life the naval and air forces, the soldiers and marines, as well as engineers creating the machinery to cross vast distances, carry massive cargo, create ships that are cities at sea.”


Although not fighting veterans of the war, Howard and his parents were among 2000 civilian prisoners of war in Los Banos, Philippines for the duration of the war, and were rescued by the paratroopers of the 101st Division just before they were to be executed by the Japanese. They were rescued on the same day that the flag was raised on Iwo Jima.
We donated many arms from our collection, as well as the papers his Mother saved from the camp, all of which are now on display in this exhibit.  Our other World War II arms collection is displayed in the exhibit, “The Road to Berlin”, which opened a year ago.


The National World War II Museum, located in New Orleans, is the brainchild of the late Stephen Ambrose and Gordon H. Mueller, President & CEO of the Museum.  Initially founded in 2000 as the D-Day Museum, this year they have had 600,000 visitors and a staff of 250 plus 300 volunteers.  It is rated as the #1 New Orleans attraction and Trip Advisor cites it as the #3 museum in the country.
Posted by Jean Hart at 4:25 AM