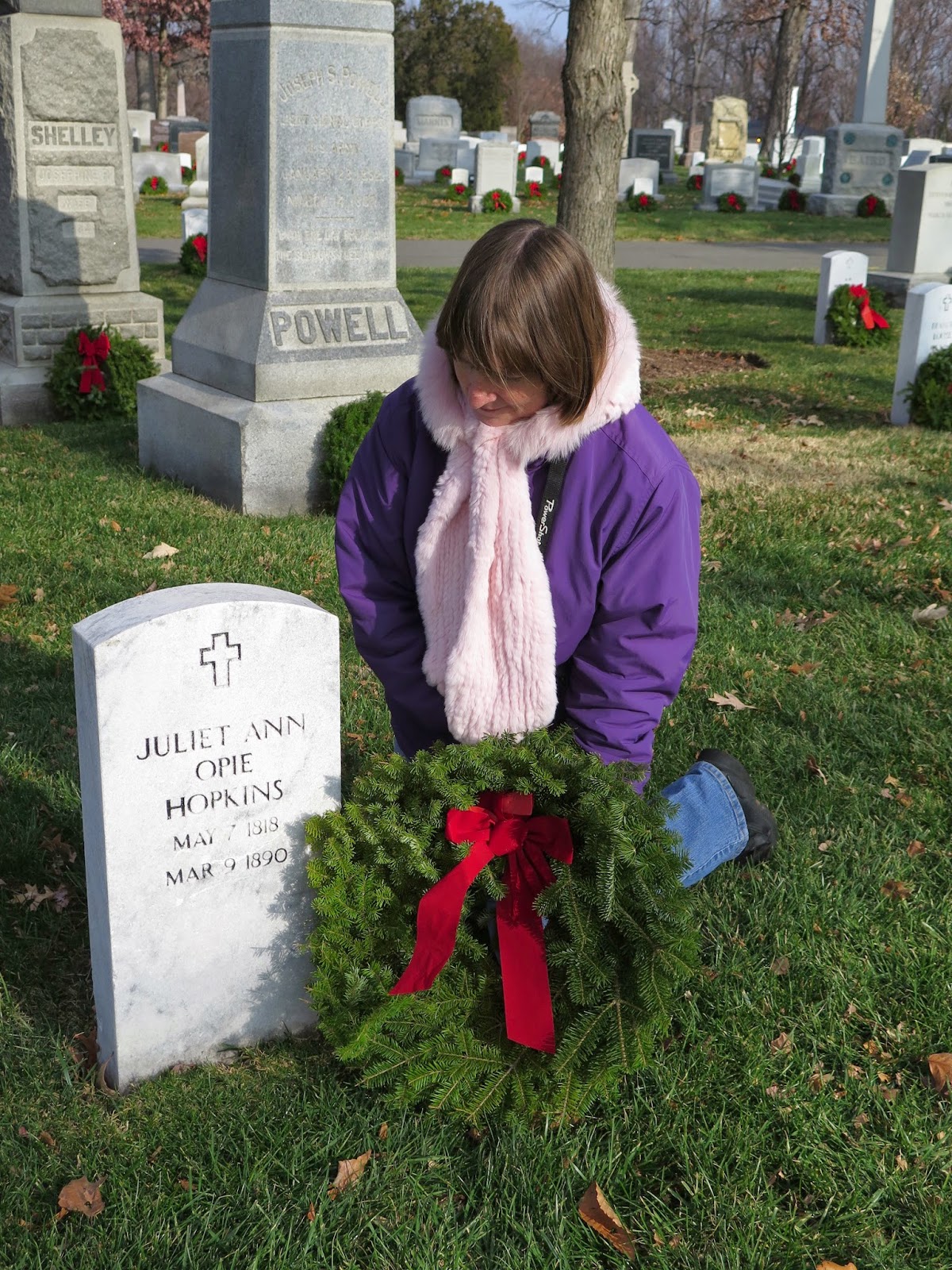 Chapter member, Viki Armentrout, a veteran, was fortunate enough to lay a wreath on the grave of Juliet Ann Opie Hopkins ("the Florence Nightingale of the South"), (1818-1890) at Arlington National Cemetery on December 13, 2014.   Juliet has a great story, which includes being shot in the leg twice while rescuing wounded men from the battlefield during the Civil War with plans to nurse them back to health. During the Civil War, Juliet Hopkins and her husband sold most of their real estate holdings and donated the money to the cause of the Confederate States of America. She was buried at Arlington with full military honors.
Viki intentionally sought women's graves. According to Wreaths Across America, this is the first year that all of the graves at Arlington received wreaths. 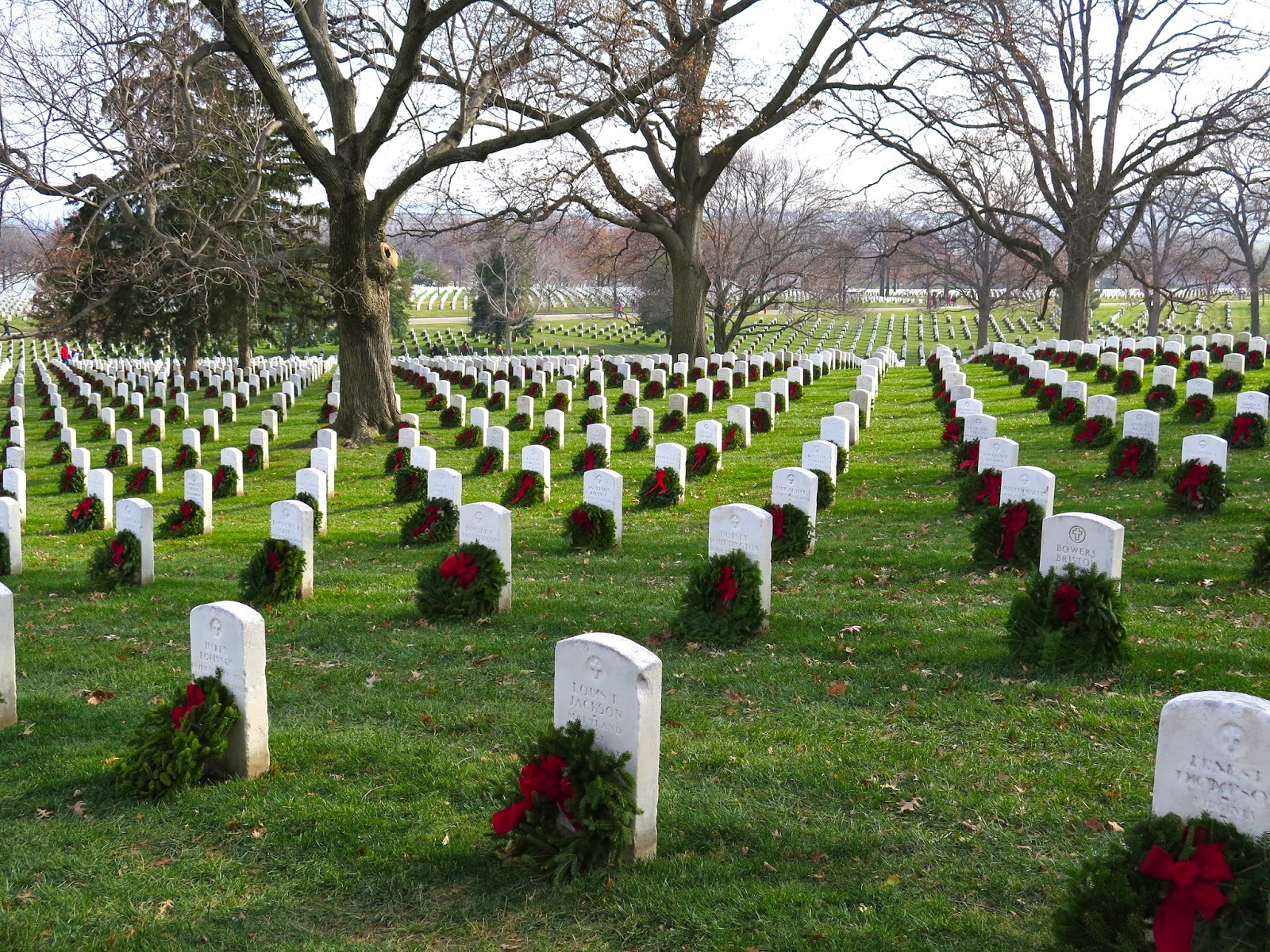 The Cossart family are descendants of the Huguenot refugee Jacques Cossart, I  (b.ca. 1595) and his wife Rachel Gelton, thru their son Jacques Cossart (1639-1685).  They descend from a very old and distinguished family of Norman-French Protestant Huguenots whose original homes were in Normandy and Picardy in northern France.
After the massacre of St. Bartholomew’s Day in France of French Protestants, Jacques and Rachel Cossart sought refuge among the hospitable Dutch. Their son, Jacques Cossart, II was baptized at Leyden, Holland on May 29, 1639 and died at Bushwick (Brooklyn, Long Island, NY) in 1685.   He was the first immigrant bearing the name Cossart to come to the American Colonies. (See “Baird’s Huguenot Emigration to America”, Vol.1 pages 182-3).
He married Lydia Willems (sometimes Lea Vilman) in Leydon, Holland.  They left there in 1657 and returned to Leyden, Holland in December 1659 from Germany.    They were received into the Church of Leydon.   After taking their letter from the Huguenot Church at Leydon, in October 12, 1662, Jacques Cossart (Cossairs), wife and two children, aged 5 and one l ½ years, arrived at New Amsterdam on the ship “DePumerlander Kerch”, with Captain Benjamin Berentz, and other passengers from Leydon, Holland. (Year Book of the Holland Society, 1902, page 22).
Jacques and Lydia had 6 children:
1.     Child  - 5  in 1662
2.     Child – 1 ½ in 1662
3.     Jannette – bap. 1665 m Jacobus Goelet
4.     Jacques(Jacob) – bap. 1668
5.     David – b 1671 – m Styntje Joris
6.     Anthony – bap. 1673 m Elizabeth Valentine
The Latinization of the name Cossart, by the additions of the letters “is” or “us” is not uncommon.   The name has many variations:   Cozad, Cosart, Cozart, Cossairs plus several more.
They joined the Dutch Church at New Amsterdam on April 1, 1663.   He took the oath of allegiance to England in 1664.  Jacques Cossart II held the office of collector of monies, under the British administration, promised by the inhabitants for support of the clergy.  The court allowed him 4% of what he collected.  (Court Minutes of New Amsterdam, Vol.VI, pp.40, 44and 79).
He had arrived just 36 years after Manhattan Island  was purchased  from the Indians.  He purchased a house and a lot in New York City which  is  now at the corner of Whitehall and Marketfield Street. His youngest son, Anthony, removed to Morris County, New Jersey. My line continues  as Cozad.   The grandson of Anthony, Samuel Cozad, of New Jersey,  was  a Captain in the American Revolution.
This 419 year line is verified by The Huguenot Society, Colonial Dames and NSDAR.  Contributed by Ann Skidmore.

John Webster of Warwickshire, England, came to the Massachusetts Bay Colony around 1630-1633. He moved from Newtown, now Cambridge, Massachusetts, to the present site of Hartford, Connecticut, in 1636, presumably with the Rev. Thomas Hooker. Hartford was then known as Suckiaug meaning black earth. John located on the south side of Little River,on what would later become known as Governor Street. He served the Connecticut Colony as follows: 1637, Officer of the Court and elected to the General Court; 1638 elected as Deputy Commissioner, 1639-1655, Magistrate or Judge; 1654, appointed Member of Congress of the United Colonies; 1655, Deputy Governor; 1656, Governor; 1657-1659 First Magistrate or Chief Judge. He was one of ten gentleman out of 153 original settlers of Hartford honored with the title of Mr. In 1659 he went with 59 other persons to establish Hadley, he lived temporarily in Northampton. He lived almost two years in Hadley before he died there in 1661. He served in 1660 and 1661 as Magistrate. His wife, Agnes, died six years later. They had seven children: Matthew, William, Robert, Thomas, Anne, Elizabeth, and Mary.

John Johnson was born about 1590, records found in England state his family was from Abbotts Ann, County of Hampshire located just outside of Andover, West of London.  Although, known as a London man he was in business with his brother, Robert, a merchant (today we call it a grocer).
He sailed in the Virginia Company about 1611. Records show he was in Jamestowne on or before 1612. He was known as an Ancient Planter, one who came to the Virginia Colony as a permanent settler. He was also a yeoman, a small farmer or freeholder. When he patented his land, he was granted 100 acres by Governor Sir George Yeardly. John served as juror several times.
He had 15 acres on the NE part of Jamestowne Island and 85 acres north of Archer’s Hope Creek called Jockey’s Neck, now the site of the Williamsburg Winery. Research shows he lived on the 15 acres and farmed his cash crop on the 85 acres, probably tobacco. There seems to have been a number of disputes regarding neighbors and the mistaken identity of one’s own hogs, resulting in the slaughter of each other’s swine. Johnson went to court over the issue and afterwards began branding his live stock.
John married Ann, who was probably one of the ‘Maids’ that arrived in 1619. They had three children: Anne, John, and unknown. The family traveled back to England in the 1630s and returned with 5 servants, this entitled them to 450 acres of land. John died around 1636.
John Rolfe served as secretary and recorder general of Virginia (1614–1619) and as a member of the governor's Council (1614–1622). He is best known for having married Pocahontas in 1614 and for being the first to cultivate marketable tobacco in Virginia. Joined by his first wife, whose name is unknown, Rolfe sailed on the Sea Venture, a Virginia-bound ship that wrecked off the islands of Bermuda in 1609. There his wife gave birth to a daughter, but mother and child soon died. In Virginia, Rolfe turned to experimenting with tobacco, a plant first brought to England from Florida. The Virginia Indians planted a variety that was harsh to English smokers, so Rolfe developed a Spanish West Indies seed, Nicotiana tabacum, that became profitable and, indeed, transformed the colony's economy. In 1614, Rolfe married Pocahontas, daughter of Powhatan, the paramount chief of Tsenacomoco. The marriage helped bring an end to the First Anglo-Powhatan War (1609–1614), but Pocahontas died in 1617 while visiting England with Rolfe and their son, Thomas. While in England, Rolfe penned A True Relation of the state of Virginia Lefte by Sir Thomas Dale Knight in May Last 1616 (1617), promoting the interests of the Virginia Company of London. Back in Virginia, he married Joane Peirce about 1619 and had a daughter, Elizabeth. He died in 1622. Source: Encyclopedia Virginia.

Our Most Popular Ancestor: Abraham Estes

Thirty six of our members name Abraham Estes as an ancestor.


Abraham Estes It is not known where Abraham Estes' family emigrated from. Much research has been attempted throughout the years, some in rather secluded places for authentic copies of wills, deeds and other court records, which were once of record in the various Virginia courthouses.  Because of the destruction of many of the county court records of Virginia by fire, war and theft, these searches have led to superior and district courts to which cases from the various county courts were often times appealed, or where authentic transcriptions of county court records were found, presented as evidence in pending suits, and now perhaps preserved in no other place. Researchers have also found family papers, petitions to the legislature, and many wills from those counties commonly called the “burnt Counties” of Virginia.  One of those sources found was the will of Abraham Estes, Sr., which is copied below:
The Will of Abraham Estes of Caroline County, Virginia:In the Name of God Amen, I Abraham Estes of the County of Caroline and Parish of St. Margaretts being sick and weak do make this my Last will and Testament in manner and form following, that is to say first and principally I do recommend my Soul into the hands of Almighty God who gave it hoping for forgiveness of my manifold sins through the merritts and mediation of my blessed Lord and Savior Jesus Christ and for my body to be buried in a Christian like manner at the Discretion of my Executors hereafter named.
And for what worldly Goods it has pleased God to bless me with I give and dispose of as follows:


Item:  I have given my former wife’s children namely Catherine Tamplin, Abraham Estes, Barbery Brock, Mary Booten, Samuel Estes and Phillip Estes all that I do intend to give them and my will is that they shall have no more of my estate.


Item: I do lend to my loving wife Elizabeth Estes all my Estate real and personal that shall be left after my just debts are paid during her widowhood, but if in case she should marry then my will is that she shall enjoy none of my Estate only what the law allows her.

Signed sealed and published this to be my Last Will in the Presence of: Her Ann X Tamplin Mark

At a Court held for Caroline on the 8th of February 1759: The Last will and Testament of Abraham Estes, deceased, was proved by the others of two of the witnesses thereto and ordered to be recorded.  William Waller, and Saml Hawes, jr. Executors named in the said Will refuse to take upon themselves the burden of the said Executorship and On the motion of Elizabeth Estes it is ordered she have Administration of the said Estate with the will annexed and acknowledge a Bond for the same.

The family of Abraham Estes has migrated to all parts of America; a large group migrated to NC in the early years.
Posted by Jean Hart at 1:52 AM No comments:

These ancestor stories were contributed by Ella Mabie and are from the "House of Burgesses Ancestor Roster Book", which is only on CD will be available at our February meeting, the 100th Anniversary Celebration of our Society. This group of ancestors is from Plymouth.  If the information is not cited, it was supplied on the application or by the member.


These stories were contributed by Ella Mabie and come from the "House of Burgesses Ancestor Roster Book", which will be available at our February meeting when we celebrate the 100th Anniversary of our Society. The Ancestor Roster Book is only available on CD. These ancestors are from Jamestown.